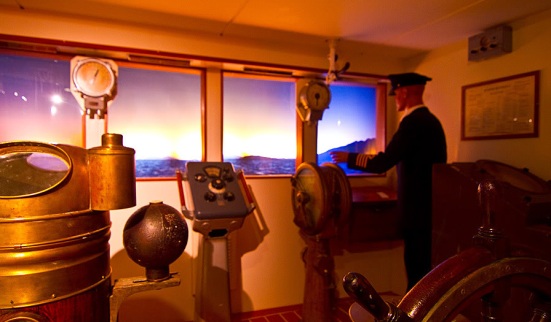 Every ship needs a captain that knows how to navigate the waters especially when it’s a relationship. The captain of this “ship” must understand that the sailors on board the ship are counting on their captain to bring them safely to their destination. This safety-first thinking comes from the realization that at the end of the day, if the ship starts to sink, then there’s no longer captain, first mate or sailor; everyone are just passengers.

Every captain of a relationship must be committed to his ship. The captain needs to come to terms with the fact that everything that he owns or will ever own is either in the ship or is connected to the ship. This is the only type of relationship anyone should board – a ship whose captain is willing to die to save it. When the sailors know that the captain is vested in the soundness of the ship, then they sail on without too much fear or doubt. No matter the weather, no matter the distance, no matter the enemies, all the ship’s passengers are mentally secured and physically vested. But if the captain acts like the ship is a hired ship and not owned or endeared by him, then even in the calmest oceans there is turmoil. Even if there’s no enemy, no storm, or even if the ship appears sturdy, a captain that will not “own” his ship will have dissenters on board. (And an overthrow may soon arise.)

Every good captain of a relationship knows his ship. From the mast to the sails, from the bow to the stern, the captain survey’s his ship on a daily basis to ensure that his ship is ready to sail. A routine check of the relationship is necessary to insure smooth sailing even in the roughest seas. A lose anchor can endanger the captain and crew. With the loss of the anchor the ship can lose its bearing in the sea and be tossed about with every changing of the wind and shifting of sails. (Even strong ships can drift away from its course and unto danger when those onboard do not mind the anchor.) A broken sail can be detrimental to not only the speed of the ship, but also it’s navigation. A weakened hull can allow water to slowly seep into the lower, unseen parts of the ship which, if gone unchecked, can lead to an opening, a breach in the ship that can cause it to untimely sink. The deck needs to be clutter free to insure free-flow of passengers, supplies, and communication especially in times of storm. A deck full of nonessentials littering it can be life or death in a fire, a tumultuous wave, or other types of emergencies. A relationship left to its own will not be ready when in the face of rough, open waters. There must be a routine check, maintenance and upkeep.

The captain must know how to communicate the needs of the relationship to his first mate and his crew. Whether its inventory or sea-worthiness, the captain must be able to trust those whom he’s enlisted to help him sail. The captain appreciates the fact that keeping important, ship-related information to himself can endanger the crew and the ship so he communicates it the best way possible. The captain knows the doubts and fears of his crew but he also knows that certain information must be related to everyone for preparedness sake. So the captain learns the art of staying information that can harm a relationship – making the crew on edge, panicky, or sullen – while expressing pertinent information to make the crew ready for war, bad weather, or a sudden change of direction. His communication ability makes the crew trust him and moves without much resistance despite changes or difficulty of task.

The strong captain must embrace his responsibility in his relationship. He is not afraid to make decisions for his ship in so doing, he does not fear to hear his fellow sailor’s opinion no matter how opposite it is from his. The captain understands that though he makes the final decision it does not necessarily mean that it was his decision that was made. The captain is the last word in the ship, but does not care who fed him the last word. Because of this the captain takes the credit for a successful journey, but is also willing to take the scorn of a bad decision – even if it was an advice he had taken from his fellow sailors. Ultimately his concern is not about credit or scorn; it’s about the health of the ship and the outcome of the course.

A wise captain knows what it takes to navigate the relationship out of the storm. He understands that though the storm may be fierce and it may be long, there will be a time of reprieve, rest and serenity. (He takes comfort in the fact that there maybe many storms in the ocean, but the ocean is constant and the storm is only for a season.) He orders the crew to secure the riggings, fasten the sails, and evacuate the deck so as to lose nothing of real value. He expertly guides the ship in and out of the raging waves and prays that the build of the relationship is strong enough to outlast the blast of waves that pound the sides of the ship. The captain does not think about the sailing of yesterday to determine his sailing in the storm today. He focuses on one storm at a time and learns from each storm he faces. (He logs what he has learned and uses it for the next, pending storm.) As a wise captain he orders evasive maneuvers and counter measures to keep the ship afloat. He knows when to flow with the waves and when to sail against it. He drives against the storm in hopes of a brighter tomorrow. He does not fear the storm for otherwise he wouldn’t have set sail. And he does not fear for the loss of his life or possessions, in the storm he is only concerned about the cares of the sailors and the passengers on board. During the storm he does not sit back and allow others to navigate his ship; he takes authority of the wheelhouse and dismisses accolades when he navigates the storm successfully. The integrity of the ship and the safety of his crew is his own reward.

The captain loves his ship and owes his life to its crew. His relationship is his life and his life is his relationship. He is diligent. He knows the successes of his navigation and the integrity of his ship may be the only lasting legacy he will leave behind.

One thought on “The Captain and His Relation “Ship””